Democracy in the Americas Symposium 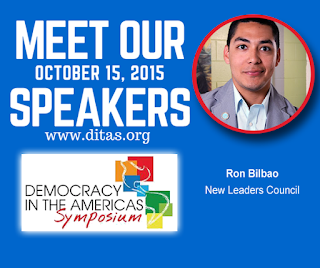 Posted by RonBilbao at 8:01 PM

Ron Bilbao is Legislative Specialist at the Florida Education Association (FEA), Florida’s largest association of professional employees with more than 140,000 members. He is a proud Miami native of Venezuelan and Colombian heritage.
Ron’s passion for social justice was firmly rooted at a young age. In high school, he served as President of the Miami-Dade County Student Government Association (SGA) where he created their first student-lobbying program leading fellow students to the state capital to advocate for anti-bullying legislation and juvenile justice reform. He also led the SGA in a federal lawsuit against the Miami-Dade County School Board for banning the children’s book Vamos a Cuba.
In college, Ron continued his tradition of student-led advocacy through founding the North Carolina Coalition for College Access, which lobbied state leaders for in-state tuition for undocumented youth. As a first generation college student, he founded the university’s Latina/o center to advance opportunities for this emerging population.
Ron returned home to Miami in 2010 to become the lobbyist for the ACLU of Florida defending civil liberties in an adversarial legislature. Most recently, Ron served as Political Director for SEIU Local 1991 representing nurses, doctors and healthcare professionals at the nation’s largest public hospital system Jackson Health.
In 2014, Ron was selected by LatinoLeaders Magazine as one of Miami’s “Leaders of the Future” and was named one of the “30-under-30 Rising Stars in Florida Politics” by Saint PetersBlog.
Ron is a founding fellow of the 2012 NLC Miami inaugural class and has since served as Chapter Vice Director and in various roles on the exec team. Ron also serves on the Board of Directors of SAVE, Miami-Dade's largest LGBT advocacy organization. Ron is a graduate of the University of North Carolina at Chapel Hill and currently resides in Miami.
Posted by RonBilbao at 11:37 AM

Proud to join the Public Policy Advocacy team at FEA

Posted by RonBilbao at 4:13 PM

Growing up, Ron Bilbao dreamed of being an astronaut. And then he faced reality — he’s scared of heights.
So Ron settled on a more down-to-Earth dream — helping people without a political voice. He was still in high school when he saw the possibilities.
As president of the Miami-Dade Student Government Association, Ron helped organize students to lobby for anti-bullying legislation in collaboration with Equality Florida. It took two years – but it passed.
“I love the idea of democracy that works on behalf of people,” Ron says. “But you’ve got to get the politics right.”
He says his family left Venezuela to escape the corruption in government.  “That formed my thinking. The way to make society better is to have everybody participate and have a stake in it.”
That same passion is reflected in his volunteer work with the SAVE, which advocates for LGBT rights, and the Florida Immigrant Coalition. He serves on the boards of both organizations.
“He was a part of the inaugural class of New Leaders Council Miami, which helps train the next generation of leaders, and remains on the executive team today.”
Defending people’s rights is one of his proudest achievements, whether it was at the ACLU or in his current position as political director of SEIU Local 1991 in Miami, representing the healthcare professionals at Jackson Healthcare System.
Here is Ron in his own words:
I am 26 years old and live in Miami. I graduated from the University of North Carolina at Chapel Hill. I hope to visit Tokyo one day.
I got into politics to try and level the playing field for those who don’t have a voice in government. Everyone deserves an equal shot at a prosperous life, and government can help or hinder that opportunity. Politics is the means for which we can achieve a more representative, more responsive government. A better government is the means for a fairer, more just society.
One principle I always put above politics is… integrity and loyalty. Integrity can’t be bought; it has to be nurtured within you so it can grow. Loyalty is never forgetting who your friends are and always remembering that to have a good friend, you have to be a good friend.  So much in this business is based on trust, and if you can’t trust those you work with, then the whole thing gets dysfunctional.
Person or people who gave me my first shot: Bob Levy I credit with giving me my first shot in politics. When I was 18, he gave me a chance to be his summer intern and work on campaigns statewide. After that, I was hooked. Bob has had, and continues to have, an inextricable influence on the kind of political person I am and hope to be. He is the personification of integrity, the definition of loyalty, and the epitome of friendship. Those of us who have worked for Bob (and there are many of us) know that our lives are better in some way for knowing this great man.
I’ve already worked for/on: I’ve worked for great people and great organizations both before and after college. I’ve already mentioned Bob Levy. My first job out of college was for the ACLU of Florida under the venerable Howard Simon. Now I have the privilege of working on behalf of the healthcare workers at the world-class Jackson Health System under the leadership of Martha Baker at SEIU.
When I begin a project or first work on a campaign, I look for… what the ultimate benefit to the community will be. I also look for integrity in the people I’m working for and with.
I’ve been blessed to have these people as my mentors: I’ve already mentioned the mentors I’ve worked for: Bob Levy, Howard Simon, and Martha Baker. At UNC-Chapel Hill, I had fantastic mentors including distinguished author, journalist, and professor Paul Cuadros, respected administrator Josmell Perez, and brilliant artist Mario Marzan. In Miami, Christopher Norwood was an early friend and continues to guide me through the complexities of Miami politics. CJ Ortuno gave me a shot when he recruited me to be on the board of SAVE Dade three years ago. Through SAVE, I’ve met some of the best political mentors anyone could ask for: Joe Falk, Christian Ulvert, and the newest executive director Tony Lima. All these folks are more than just mentors; they are friends I still turn to for career and personal advice today.
The people I most admire in politics are: The people behind the scenes that make government work: the committee staff, legislative aides, even the bill readers and the Sargent at Arms; the lobbyists who help electeds navigate complicated policy so that they know what they’re voting on – for better or worse; the folks who help get people elected in the first place – field, comms, and finance; and the journalists and members of the press that keep the public informed and hold all of us in the political process accountable.
One lesson I’ve already learned is… don’t take it personal. It’s difficult not to in this business, especially when the issues often hit so close to home. Try and find a way to get to the heart of the policy goal by staying true to your core principles and allowing the other side to remain true to theirs. Tough, but not impossible.
If I wasn’t working in politics, I’d be working in (which field)… Science. I always wanted to be an astronaut.
In ten years, you’ll read about me… working on behalf of the people of Miami and Florida, fighting for an equal voice in government for everyone, and continuing to work toward a fairer, more just society.
You can connect with me on social media:
@ronbilbao
Facebook
LinkedIn
Original Post: http://www.saintpetersblog.com/archives/159980
Posted by RonBilbao at 4:08 PM